One year ago today I awoke at a friend’s house off Dalton Pike in Cleveland, TN…. there’d already been one tornado warning that morning that I slept through so I hopped up and went downstairs to turn on the weather after Tiffany called…

To my shock the weather radar showed BLACK for the worst parts of the storms that were before us….BLACK! I’m a weather frrrrrrrreak but I’d never seen the radar go black, a little white here & there and of course red and bright fuchsia, but never black.  I had a feeling in my gut it’d be worse than anything we’d seen in a while around here…ever for most of us, and true to that gut I watched as not one but TWO twisters rode down the almost exact same path at 2 different times that day.  I was glued to the sky with my camera, Connie, shooting away, but yet I had a peace that this place, that we would be ok. At one point we went outside to the hill by their house and its was BEAUTIFUL over us, but right across the ridge the 2nd one came down from the Appison area…maybe 2-3 miles away!

The power went out later in the evening…in a neighborhood with buried power lines…so I knew something wasn’t right. My friend Jason grabbed my camera as the last one went through less than a mile away and made me join he and his wife Tiffany down in the basement. There we waited for what seemed like ever glued to the police scanner. I won’t lie, if I’d have had a driver I’d probably been out shooting.  Never had I been so close to a real live twister, and those of you who know me know I’m just crazy enough to want to chase and shoot a twister.

The all clear was given later that night, and somewhere around midnight we set out to the car to charge our dying phones.  Our lifelines to the world and what was going on in the midst of a blackout.  How do people with no cell phone or police scanner know what’s going on when a tornado comes through?  Living in Middle TN for a few years I grew accustomed to warning sirens, but suddenly it felt like we were in the movie Twister… “They had no warning!” rang through, and I was saddened at this thought. The thought of people just out enjoying the beautiful part of the day that I’d witnessed earlier and BAM…out of nowhere a tornado is upon them. No warning.

I was itching to drive around…in the pitch.black. and after a bit of Jason and I convincing Tiffany to come the three of us set out to see if we could offer any help of any kind and to see what all the big deal was…I mean everything was fine at their house afterall…so why was the power out??

About a mile down the road our answer became clear. We were driving OVER the power lines…some shredded and some whole.  They’d shut down the power grid was the only logical thought with so many down and crossing roadways. The windows were down and in a usually very traveled area it was eerily quiet.  We got closer to the Wal-Mart intersection but were stopped in our tracks as the gas station/market that I’d passed so many times was GONE!  Nothing left but ONE small part of the drink cooler wall. The police were already there and had it roped off, I think I remember Jason either getting out or just asking a fellow officer (I was too distracted taking in all the devastation to really pay full attention) and there was something said about a missing employee…

It wasn’t until the next day that I heard the employee was found just across the road where we had stopped…in a tree.  I don’t think I’ve ever been so thankful for darkness as I was right then because I was scowering those splintered trees in the dark with just a bit of the backlighting from the lights they’d setup at the former gas station.  I was ever so thankful I didn’t get to see what I imagine would’ve been a scene from Bones.

We drove back to their house, raised the windows as it was rather warm for April, and tried to doze off.  The thought of the pleas from the weather and news feeds on my phone asking for help and lights to go free people trapped in their homes haunted me!  WHY hadn’t I brought real shoes? Why didn’t I have my trusty Maglite, Maggie, and gloves? There was nothing I could do as I was completely not equipped….needles to say I didn’t sleep well at all.

We woke up early at about 6am to take Tiffany to work, I of course wanted to go out and see more and see if there was ANYTHING I could do to help…flip flops and all. The sunrise was BEAUTIFUL and as I stood there taking shots of it on their back deck looking towards Big Frog Mountain I cried. It was simply breathtaking!  A bright ray of sunshine broke through the clouds and I knew that it was a message from God that even after the worst storms, whether in life or actual storms, there’s always unimaginable beauty if you’ll just hold on. That message was cemented in my mind later that afternoon as well.  Thank the Lord I had my camera!  I didn’t have any real tools to help, but I had my camera.

We took her to work, and then the rescue ranger that I think is in every man, and me LOL, took over in him so we started to drive around to check on people from their Church, etc… that he knew lived in the path.  Downed trees made passing some roads impossible, but Jason thankfully knows back roads.  We received a call on the way to his pastor’s house that one of our mutual friend’s mom’s house had been hit.  We made our way slowly to her house and what lay before me was nothing short of mind-blowing. We couldn’t even pass on the road so we parked on the side and walked in. Randolph Samples road was a disaster zone.

He charged on ahead but I had to take every careful step as the Old Navy flip-flops I was sporting were not conducive to the splinters, debris, and nails that were scattered about. I was so focused on not stepping on debris that it took me a minute to register what I was standing beside…. a flower bed that had a power pole broken down towards the base and splintered… and then a rose-bush…with it’s petals still intact.  I knelt in front of the rose-bush to get the perspective I wanted of the total destruction of homes, shattered trees, and debris everywhere…while these FRAIL rose petals remained perfectly intact!  “How does this happen?” was all I remember thinking as I shot. And the answer came…”Because I wanted you to see this!  I want you to know that no matter how rough you think it is or how much you think you just can’t bear… I say you can.  If this rose-bush can survive close to 200+ mph winds, there’s nothing you can’t do with me by your side.”

I journeyed on to our friend’s house and when I arrived there were a few of her family there already helping sort through her salvageable items.  Her house was pushed back 15-20 feet off its foundation, spun around, and the wall where she would’ve been sleeping if not for the persistence of her daughter was collapsed, leaning in.  Never have I been so close to such devastation and heartbreak, but I just kept thinking…it could’ve been so much worse!

We headed back to Jason and Tiffany’s to get water, gloves, etc… and I made sandwiches for the crew. Nevermind eating…I’d forgotten all about it. We headed back to the house and I was amazed at the number of people who were now out wielding chainsaws and cutting down trees to clear roads or pitching in to help total strangers sort their stuff or board up holes, clean up, etc… Truly a volunteer spirit! It was that morning that I got Tennessee Twister, my kitten, now cat who recently had my four grand-kittens. She served to be a fun distraction for some who seemed a bit overwhelmed.

That afternoon I looked up and the most AMAZINGLY BEAUTIFUL sky was appearing before us!  The remaining dark clouds were clearing and what was left was the brightest blue with the largest, puffiest perfect white clouds I think I’ve ever seen!  It was perfect.  As I spoke of earlier it was another testament to how even after the most horrible storm there’s unparalleled beauty on the other side!

We worked well in to the afternoon, and finally exhausted and done gathering what could be salvaged we headed home. I can’t speak for anyone else, but I know I was forever changed.  I experienced a peace that I’ve never known before the day before when the storms came through. I experienced the amazing resolve of those who survived that life will go on, and I experienced a volunteer spirit that makes me proud to this day to be a Tennessean…though I’m still not a Vols football fan 😉

So, on this the one year anniversary I urge you all to look for the beauty that is promised to come and not at the immediate problem and hardship before you. “Hold on…it gets better” isn’t just a bullying saying…it goes for everything in this life.  There are reminders everywhere…if we just take the time to see them. 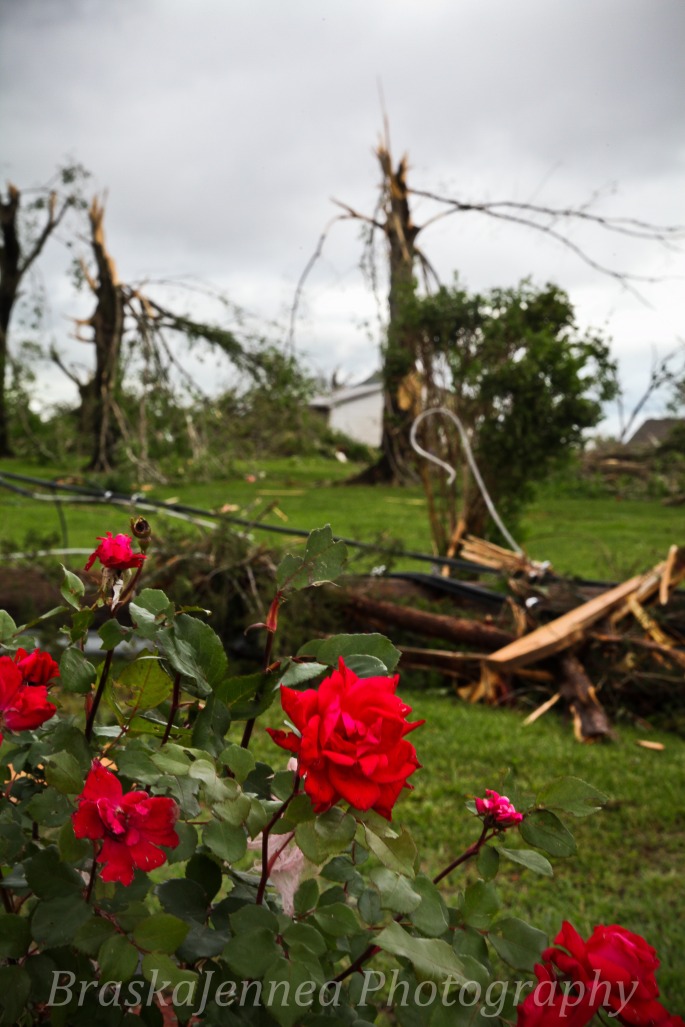 Hey Loves! I'm Braska Jennea, and I'm SO glad you found me! Professional Photographer, Curvy Posing and Marketing Coach, as well as Curvy Clothing Boutique Owner...as if I don't have enough to keep me busy ;) Strong, independent, Southern woman with a fire for Jesus, the color Lavender, Blue Raspberry Cotton Candy, hugs, and laughter! Huggers gotta hug, ya'll! I live to capture the lives and legacies of the beautiful souls God crosses my path with, but I also come from a long background of planning weddings and floral design on the side...let's be honest here...really if it's craft, or even baking, related I'm pretty game. (Just call me Martha Crocker! Nap afficianado, chapstick addict, mosquitos love me almost as much as my fur babe Ellie Mae. I will sacrifice sleep to give clients their beautiful images (hence...naps ;) ), am addicted to Home renovation shows (FIXER UPPER JUNKIE!), and dream of winters in Gatlinburg and Summers in the Florida Gulf. I live to write, am the best at roadtrips to nowhere filled with CARaoke and car dancing, and I looooove volleyball, SNOW days, and pedicures. I am blessed to be able to capture the lives and loves of Him+Her around the globe! Contact me today, and let's get this party started! XOXO, B View all posts by BraskaJennea Photography

Meet the face behind the lens

Thank you for visiting my Photography Blog! Please look around, leave a comment to let me know you were here (I LOVE meeting people and shooting them...with my camera of course ;-), subscribe, or visit my website www.BraskaJennea.com to link over to my Facebook Fan Page for more of my Portfolio, or to email me to get pricing information or schedule a shoot!